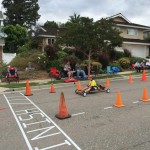 Saturday’s gray skies and threatening clouds weren’t enough to keep Pack 811 families from enjoying a thrilling day at the races!  Nestled in the charming North Hills area of Brea with the sounds of cheers and applause from fans of every age, Pack 811 Scouts zoomed down the raceway on Oakcrest Avenue, powered only by eagerness, determination, and gravity.   The Go-Karts, hand built by Scouts and their parent pit crews, survived the rugged asphalt course and earned each of their drivers a place in the annals of pack race history.

The race would not have been possible without the kindness of the friendly residents Oakcrest Avenue.  A special thank you goes to Vicky and David Ladjevic for obtaining permission from their neighbors to make use of their street for the day.    An event such as this is never possible without the effort of many helpful volunteers, including a few special siblings (Matthew R., Bradon H., Alizea H.) who hauled weights and go-karts up the hill dozens of times!  The Pack would also like to thank all of the parents who assisted with set-up, clean-up and hauling of materials for the event.

Thank you to all the racers and race fans! 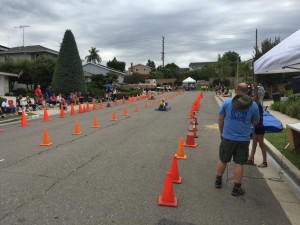 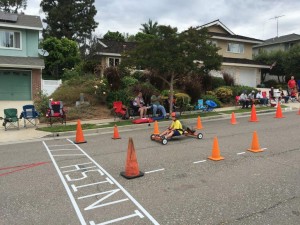 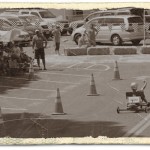 It’s time to prepare for Pack 811’s next big summer event: Go-Kart Races! Many of you know how to make miniature race cars that speed down a track, but now it’s time to build a life size race car and drive it to victory!

How it will work:

The cost of each kart is actually much higher than $45, but we are hoping to find sponsors to help the pack pay for the difference.  We need both material donations (such as lumbar and fasteners) and money donations (to pay for wheels and other components).  If you know of a company who is willing to sponsor the event, or you are willing to solicit donations from Home Depots, please contact Mike Rivera.

Scouts who participated in Pack 811’s Go-Kart race in the summer of 2013 may trade in their old kart to receive a rebate up to $30 (if components are in satisfactory shape). This is not only a great money-saving opportunity; it also upholds the practice of “Reduce, Reuse, Recycle.” Scouts are strongly urged to participate in this effort. To do so, please drop off your 2013 Go Kart at Mr. Remley’s house (1335 Strattford St., Brea, Ca 92821) before July 6th. 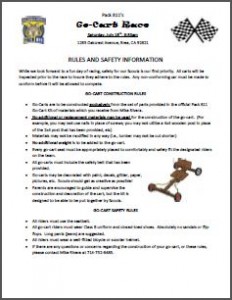 PLEASE SIGN UP YOUR INDIVIDUAL SCOUT OR TEAM AS SOON AS POSSIBLE! 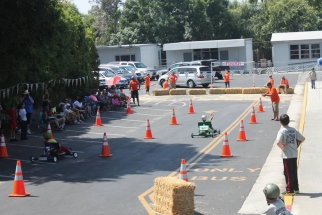 Cheered on by their families and friends, Pack 811 Scouts zoomed down the raceway at Golden Hill on a warm Saturday morning in July, powered only by determination and gravity.   The Go-Karts,  hand built by scouts and their parent pit crews, survived the rugged asphalt course and earned each of their drivers a place in the annals of pack race history.

The race would not have been possible without the efforts of the Event Coordinator, Mike Rivera, and the dozens of other volunteer pit crew members that put on the race.   Home Depot in Brea also played a critical role by not only sponsoring the race – covering nearly half of the Go Kart costs — but also providing team members to cheer the racers on.

As usual, Pack 811 Scouts demonstrated exemplary team work, courage and sportsmanship.  This first ever pack Go-Kart race was just another event designed for “fun with a purpose”.   Thank you parents and crew members – and great job racers!

Check out more photos of the event in our Photo Albums. 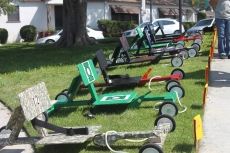 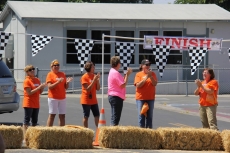 It’s time to prepare for Pack 811’s first ever Go-Kart race. Many of you know how to make miniature race cars that speed down a track, but now it’s time to build a life size race car and drive it to victory!

How it will work:

Teams of 1 – 5 scouts from the same den can sign up to build a Kart.  All team members will compete individually in their kart.  Karts must be assembled from official Pack 811 kits.  ALL required components (pre-cut wood, fasteners, seat belt, wheels) are included in the kit.  Scouts will assemble the Kart and paint it any theme they choose. 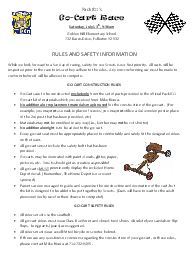 Each Kart kit costs $35 (which can be divided by the team members), and can be picked up from Mike Rivera  between June 26 and July 9, however, all teams MUST SIGN UP by July 4th.   Race day is Saturday, July 13, between 9:30am and 12:00noon.  The race will be held at Golden Hill Elementary School, located at 732 Barris Drive in Fullerton.

Note that the cart cost has been substantially reduced thanks to our sponsor, Home Depot.

Please click on the image to the right to view the build and safety rules for the race.