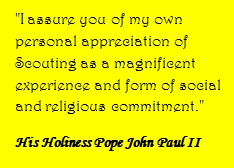 We are actively involved in many Catholic-based activities as a church ministry at St. Angela Merici Catholic Church.  Many boys in our Tiger and Wolf Dens earn their Light of Christ Awards, and many of our Bear and Webelow scouts earn their Parvuli Dei Awards.  In addition to these significant emblems, many of our boys learn about the Rosary and the Catholic Saints during their Cub Scouting years.

Pack 811 has been awarded many prestigious awards and accolades for providing our boys a nurturing, Catholic faith-based scouting environment. In addition to these awards, several of our leaders have been awarded the Bronze Pelican recognition from the Diocese of Orange for their service to youth. 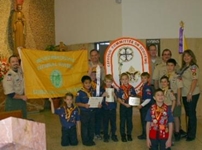 The GOLD MEDALLION AWARD is established to identify and recognize the outstanding Catholic Cub Scout Pack, Boy Scout Troop, or Venturing Crew in each of the fifteen Episcopal Regions of the United States.  National Gold Medallion winners epitomize those units that excel at providing youth with quality programs including religious activities, religious emblems participation, outdoor activities, and special events that encompass the religious, vocational, and educational aspects of Scouting under Catholic auspices. Pack 811 was honored with this prestigious GOLD MEDALLION award in 2005, 2007, 2010 and honored as a finalist in 2008 and 2009. 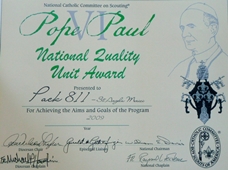 Cooperation, development, and program are the key words in the recognition of Catholic chartered units in earning the National Catholic Quality Unit Award – Pope Paul VI. The adult leadership responds to training not only in Scouting lores, but training in Catholic Scouter Development, and religious counseling. The Scouts in each Pack, Troop, Team, and Crew/Ship respond by participating in the religious emblems program respective of their status in Scouting. 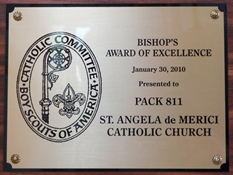 The Bishop’s Award of Excellence is awarded to the top Cub Scout Pack, Boy Scout Troop, or Explorer Post in the diocese that demonstrates a commitment to maintaining a Catholic faith-based scouting environment for it’s youth.